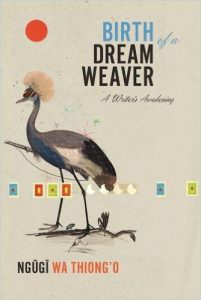 Birth of a Dream Weaver charts the very beginnings of a writer’s creative output. In this wonderful memoir, Kenyan writer Ngugi wa Thiong’o recounts the four years he spent in Makerere University in Kampala, Uganda—threshold years where he found his voice as a playwright, journalist, and novelist, just as Uganda, Kenya, Congo, and other countries were in the final throes of their independence struggles.

James Ngugi, as he was known then, is haunted by the emergency period of the previous decade in Kenya, when his friends and relatives were killed during the Mau Mau Rebellion. He is also haunted by the experience of his childhood in a polygamous family and the brave break his mother made from his father’s home. Accompanied by these ghosts, Ngugi begins to weave stories from the fibers of memory, history, and a shockingly vibrant and turbulent present.

Editorial Reviews
Review
Praise for Birth of a Dream Weaver:
One of Oprah.com’s “17 Must-Read Books for the New Year” and O Magazine’s “10 Titles to Pick up Now.”

“Exquisite in its honesty and truth and resilience, and a necessary chronicle from one of the greatest writers of our time. ”
—Chimamanda Ngozi Adichie, The Guardian, Best Books of 2016.

“It’s hard to think of another living writer today — Orhan Pamuk, perhaps — who speaks so inspiringly and convincingly about the value of literature. No serious reader will want to miss this riveting story.”
—The Washington Post

“An autobiographical masterpiece. . . As essential as Achebe’s There Was a Country, this is a riveting read in African history and literature.”
—Library Journal (starred)

“This is a powerful recollection of a turbulent time that produced leaders from Tom Mboya and Jomo Kenyatta to the tyrannical Idi Amin in response to the brutality of a dying colonialism.”
—Booklist

“In his crowded career and his eventful life, Ngugi has enacted, for all to see, the paradigmatic trials and quandaries of a contemporary African writer, caught in sometimes implacable political, social, racial, and linguistic currents.”
—John Updike, The New Yorker

“Ngugi has dedicated his life to describing, satirising and destabilising the corridors of power…Still living in exile and writing primarily in Gikuyu, Ngugi continues to spin captivating tales.”
—The Guardian

“Ngugi has flown over the entire African continent and sniffed out all of the foul stenches rising high into the air: complacency toward despotism, repression of women and ethnic minorities, widespread corruption and—undergirding all of these—a neocolonial system in which today’s lending banks and multinationals have supplanted yesterday’s European overlords.”
—The New York Times Book Review