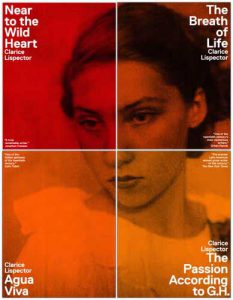 This new translation of Clarice Lispector’s sensational first book tells the story of a middle class woman’s life from childhood through an unhappy marriage and its dissolution to transcendence.

Near to the Wild Heart, published in Rio de Janeiro in 1943, introduced Brazil to what one writer called “Hurricane Clarice”: a twenty-three-year-old girl who wrote her first book in a tiny rented room and then baptized it with a title taken from Joyce: “He was alone, unheeded, near to the wild heart of life.”

The book was an unprecedented sensation ― the discovery of a genius. Narrative epiphanies and interior monologue frame the life of Joana, from her middle-class childhood through her unhappy marriage and its dissolution to transcendence, when she proclaims: “I shall arise as strong and comely as a young colt.”

Editorial Reviews
From Bookforum
The original translation, by Giovanni Pontiero, is not radically different from the new one, by Alison Entrekin, but in small ways, the cumulative effect of the book is much improved. —Rachel Kushner

It is jarring and yet restorative to read a writer whose focus is so private, internal.

Her images dazzle even when her meaning is most obscure, and when she is writing of what she despises she is lucidity itself.

One of 20th-century Brazil’s most intriguing and mystifying writers.

“We now finally have a translation worthy of Clarice Lispector’s inimitable style. Go out and buy it.”

Lispector is one of the hidden geniuses of twentieth century literature, in the same league as Flann O Brien, Borges and Pessoa utterly original and brilliant, haunting and disturbing. –Colm Toibin”

Her images dazzle even when her meaning is most obscure, and when she is writing of what she despises she is lucidity itself. ”

There’s a feeling of encountering something completely new and classic at the same time. ”

I had a sort of missionary urge with her…but I started thinking, even when I was 19: How can I help this person reach the prominence she deserves? –Benjamin Moser (06/14/2012)”

Clarice Lispector was born in 1920 to a Jewish family in western Ukraine. As a result of the anti-Semitic violence they endured, the family fled to Brazil in 1922, and Clarice Lispector grew up in Recife. Following the death of her mother when Clarice was nine, she moved to Rio de Janeiro with her father and two sisters, and she went on to study law. With her husband, who worked for the foreign service, she lived in Italy, Switzerland, England, and the United States, until they separated and she returned to Rio in 1959; she died there in 1977. Since her death, Clarice Lispector has earned universal recognition as Brazil’s greatest modern writer.

Alison Entrekin has translated a number of works by Brazilian and Portuguese authors into English, including City of God by Paulo Lins and Budapest by Chico Buarque.

Benjamin Moser is the author of Why This World: A Biography of Clarice Lispector, which was a finalist for the National Book Critics’ Circle Award, and is also the editor of a new translation of ​Clarice ​Lispector’s work​, of which this is the sixth volume​. A former books columnist at Harper’s Magazine, Moser is now a columnist at The New York Times Book Review, and is currently at work on ​the​ authorized biography of Susan Sontag. He lives in the Netherlands.