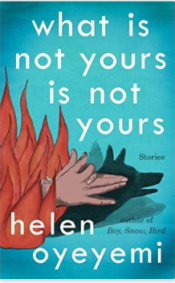 An NPR Best Book of 2016
Longlisted for the PEN Open Book Prize
A Washington Post Notable Fiction Pick
A Slate Best Book of the Year
One of Esquire Magazine’s Best Books of 2016
One of Oprah.com’s 10 Favorite Books of 2016

“Flawless. . . another masterpiece from an author who seems incapable of writing anything that’s less than brilliant.” —NPR

From the award-winning author of Boy, Snow, Bird and Mr. Fox comes an enchanting collection of intertwined stories.

Playful, ambitious, and exquisitely imagined, What Is Not Yours Is Not Yours is cleverly built around the idea of keys, literal and metaphorical. The key to a house, the key to a heart, the key to a secret—Oyeyemi’s keys not only unlock elements of her characters’ lives, they promise further labyrinths on the other side. In “Books and Roses” one special key opens a library, a garden, and clues to at least two lovers’ fates. In “Is Your Blood as Red as This?” an unlikely key opens the heart of a student at a puppeteering school. “‘Sorry’ Doesn’t Sweeten Her Tea” involves a “house of locks,” where doors can be closed only with a key—with surprising, unobservable developments. And in “If a Book Is Locked There’s Probably a Good Reason for That Don’t You Think,” a key keeps a mystical diary locked (for good reason).

Oyeyemi’s tales span multiple times and landscapes as they tease boundaries between coexisting realities. Is a key a gate, a gift, or an invitation? What Is Not Yours Is Not Yours captivates as it explores the many possible answers.

From School Library Journal
Keys are central to the short stories in this collection; they can either open or lock away something of significance for the characters. All of the tales are intertwined with themes of search and possible retrieval, which will draw young adult readers into worlds that are sometimes secretive and sometimes elusive; they will be able to easily identify with that search of self that so often comes with adolescence. The characters are relatable to YA readers, from the young woman looking for her long-lost mother and heritage to the hopeful music fan wanting to find the best in a broken artist. These worlds and characters are complex and passionate, and readers will find themselves longing for more once the stories end. Even though the settings are quite strange (a locked library, a city of stopped clocks, a marshland of the drowned), there’s a complexity here and the brilliant prose gently pulls readers in, encouraging them to identify with the characters. VERDICT A must-add to libraries, this work will appeal to fans of literary fiction.—April Sanders, Spring Hill College, Mobile, AL

“Oyeyemi so expertly melds the everyday, the fantastic and the eternal, we have to ask if the line between ‘real’ and ‘unreal’ is murkier than we imagined—or to what extent a line exists at all. . . The deeper one descends into the fabulist warrens of these stories, the more mystery and menace abound, and with each story I had the delightful and rare experience of being utterly surprised. . . Transcendent.” —The New York Times Book Review

“It is, in a word, flawless. . . Oyeyemi seems to be incapable of writing anything that’s not wholly original. . . Oyeyemi manages to make the story both realistic and fantastical, and the characters are rendered with grace and compassion. . . [What Is Not Yours Is Not Yours] is a lot of things: dreamy, spellbinding, and unlike just about anything you can imagine. It’s a book that resists comparisons; Oyeyemi’s talent is as unique as it is formidable.” —NPR, Michael Schaub

“Oyeyemi’s fictional world is scintillating and eccentric, an ‘implosion of memory,’ as one character puts it.” –The New Yorker

“What Is Not Yours Is Not Yours. . . boasts ambitious stories written masterfully by an adventurous author, and is another example of Oyeyemi’s skill at finding inspiration in the smallest and most ephemeral details.” —Women in the World, in association with The New York Times

“An enchanting and beautifully crafted first collection of stories, linked by the recurrence of keys. . . Oyeyemi’s storytelling is without parallel.” —BBC.com

“Oyeyemi infuses magic into the lives of contemporary characters.” —TIME

“Dizzying, baffling, and beguiling. . . The stories in What Is Not Yours Is Not Yours are unruly in the best way, drawing on pre-modern modes of tale-telling (fairy tales, Boccaccio, The Arabian Nights) to show they’ve lost none of their power in the present.” —New York Magazine, Vulture

“[Oyeyemi] again shows her ability to mesmerize and enchant.” —The Washington Post

“Oyeyemi writes with mastery, sometimes keeping her prose sparse and declarative only to unleash a bounty of description and humor a sentence later.” —Entertainment Weekly

“In this collection of short stories, there are many keys that unlock many things. . . What links them all? You’ll want to open and see.” —Cosmopolitan

“Inventive and free-ranging. . . Combining the fantastical and the ordinary to dreamlike effect, these tales are full of tenderness, humour and strange delights.” –The Financial Times

“Summarizing Oyeyemi is like trying to tell a dream. . . Casual and accessible at the sentence level, [these stories] are not so much experimental as deeply comfortable with the pre-narrative and proto-narrative impulses at the heart of storytelling.” —The Chicago Tribune

“A potent and playful collection.” —The Boston Globe

“[U]napologetically odd—a goldmine for those who crave magical realism with surprising twists told through spectacular writing. . . Readers should take their time with each story, possibly rereading in order to glean as much of Oyeyemi’s intent and meaning as possible.” —San Francisco Book Review

“These hauntingly enigmatic linked short stories attest to the author’s reputation as a stylist of the first rank… Fasten your seatbelts for the ride… ‘What Is Not Yours Is Not Yours’ [is] a testament to her growing reputation as a contemporary master.” —Minneapolis Star Tribune

“Flirting with the speculative, Oyeyemi weaves stories about living puppets and their puppet masters, old diaries not meant to be opened, ancient libraries, and secret gardens. It’s hands-down my favorite book of the year thus far.” —The Chicago Review of Books

“Think the god Hermes, that fleet-footed trickster, and perhaps you have Oyeyemi’s style in a nutshell… Oyeyemi’s infinitely nested stories seem an end in themselves, born of a limitless imagination.” —Los Angeles Review of Books

“Oyeyemi demonstrates her deftness with description, of finding beauty in bizarre places. . . being granted access to these inventive and ambitious stories is a bit like receiving a gift, one full of strange and private wonders.” —Miami Herald

“Whether it’s the one about the puppetry school or the mystical diary, these nine virtuosic stories promise to mix up your reading diet with deliciously weird, thought-provoking, and fearless fare.” —Los Angeles Magazine

“In every story, surprising and beautiful phrases fall carelessly from the author’s pen. Which is a good reminder for aspiring writers: Trust that your imagination is infinite. Creativity is not like currency; spending it doesn’t leave you with less. Thinking creatively inspires more creativity. Oyeyemi shows us what can be accomplished with absolute trust in the expansiveness of one’s imagination. If you’re feeling uncertain, just dip into What Is Not Yours Is Not Yours for the proof.” –Washington Independent Review of Books

“A book that is sure to unlock the imagination of anyone who follows along.”—Refinery29

“There is no other fiction writer working in English, save Toni Morrison, whose books I look forward to more.” —Brooklyn Magazine

“Contains Oyeyemi’s heady trademark combination of upside down fairy tale fantasy that is as emotionally resonant as it is inventive, and the excellent details from modern life that bring her stories firmly into some magical version of our own world.” —Esquire

“A restless imagination harnessed to a smooth and propulsive prose style — Helen Oyeyemi’s fiction is a juggernaut, and she brakes for no one.” —Vulture

“Helen Oyeyemi is a literary genius, and it shows in this fantastic collection of short stories. . . With characters that will welcome you, push you, and surprise you, Oyeyemi’s writing takes you past your expectations.” —Bustle

“Helen Oyeyemi has established herself as one of the premiere fabulists in the realm of the contemporary novel. . . [This collection] serves beauty and violence in equal measure, but is beholden to neither.” —Flavorwire

“Here is the delightful union of vivid language, compelling plot, resonant characters and profound meaning that we turn to literature to find.” —The Root

“On the page [Oyeyemi] roars. . . Oyeyemi leaves us spellbound and begging for more of her ingenious and utterly addictive prose.” —Essence

“Helen Oyeyemi is a master at mixing magical elements with substantive topics.” —Redbook

“Both charming and unsettling, Oyeyemi’s stories will stay with you a long time.”—Bust

“[A] word must be said about the prose itself: spectacular.” —Electric Literature

“Stunning. . . Highly imaginative and enchanting. . . This collection is Oyeyemi at her best.” —Buzzfeed

“These nine casually interlocking stories. . . overflow with the cerebral humor and fantastical plots that readers have come to expect from Oyeyemi.” —Kirkus (starred)

“[Oyeyemi’s] enthusiasm for a world where witches and phantoms coexist with psychiatrists and graduate students is infectious. What Is Not Yours Is Not Yours leaves readers with the captivating notion that behind every locked door lies additional mysteries.” —BookPage

“Page after page of macabre wit and beautiful, lingering imagery. This is a book where a busking viszla and ironic prison selfies happily co-exist. . . If these stories are mazes, they’re ones where readers can be all too happy to find themselves lost.” —Books and Whatnot

Helen Oyeyemi is the author of five novels, most recently Boy, Snow, Bird, which was a finalist for the 2014 Los Angeles Times Book Prize. She received a 2010 Somerset Maugham Award and a 2012 Hurston/Wright Legacy Award. In 2013, she was named one of Granta’s Best Young British Novelists.