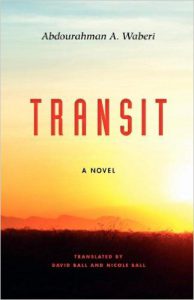 Waiting at the Paris airport, two immigrants from Djibouti reveal parallel stories of war, child soldiers, arms trafficking, drugs, and hunger. Bashir is recently discharged from the army and wounded, finding himself inside the French Embassy. Harbi, whose wife, Alice, has been killed by the police, is there too—arrested earlier as a political suspect. An embassy official mistakes Bashir for Harbi’s son, and as Harbi does not deny it, both will be exiled to France, Alice’s home country. This brilliantly shrewd and cynical universal chronicle of war and exile, translated into English for the first time, amounts to a lyrical and reflective history of Djibouti and its tortuous politics, crippled economy, and devastated moral landscape.

“Transit is an essential volume for readers and researchers of post-colonial literature and history.” ―ForeWord Reviews

“Transit is an impressive text, and a very good introduction to Djibouti.” ―Complete Review

“These five voices offer distinct views of Djibouti, at times similar, at other times seemingly irreconcilable, and are by turns lyrical, nostalgic, idealizing, satirizing, and blisteringly critical of the country’s history, politics, culture, and traditions.” ―Tess Lewis, Hudson Review

“In this thought-provoking and often enigmatic novel, Abdourahman Waberi reflects on the series of horrors―political, economic, religious, and environmental―which have dominated his country in recent years…” ―Mary Whipple Reviews

“[S]een as a whole, this is a very important book with an unusual structural approach that is well suited to bring out the complexity of the subject matter. It should be of interest to anybody interested in the political realities of African’s many border and power conflicts, and the Horn of Africa region and Djibouti in particular. The translators’ Introduction is essential and very valuable to assist the reader’s understanding.” ―Africa Book Club

“Steeped in borth historical lore and the socio-political realities of the small ex-French colony of Djibouti before and during its 1990s civil war, Waberi’s new collection tells the alternatively inspiring and somewhat laborious tale of Bashir ‘Binladen’.” ―Publishers Weekly

About the Author
Abdourahman A. Waberi is a novelist, essayist, poet, teacher, and short-story writer. Born in Djibouti, he now lives and writes in France. He is author of The Land without Shadows, In the United States of Africa, and Passage des larmes. Winner of the Stefan-Georg-Preis, the Grand prix littéraire d’Afrique noire, and the Prix biennal “Mandat pour la liberté,” he was chosen one of the “50 Writers of the Future” by the French literary magazine Lire.

David Ball and Nicole Ball have previously translated Waberi’s novel In the United States of Africa.