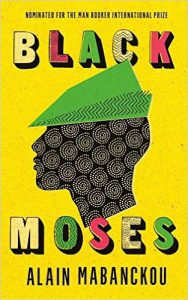 It’s not easy being Tokumisa Nzambe po Mose yamoyindo abotami namboka ya Bakoko. There’s that long name of his for a start, which means, “Let us thank God, the black Moses is born on the lands of the ancestors.” Most people just call him Moses. Then there’s the orphanage where he lives, run by a malicious political stooge, Dieudonné Ngoulmoumako, and where he’s terrorized by two fellow orphans—the twins Songi-Songi and Tala-Tala.

But after Moses exacts revenge on the twins by lacing their food with hot pepper, the twins take Moses under their wing, escape the orphanage, and move to the bustling port town of Pointe-Noire, where they form a gang that survives on petty theft. What follows is a funny, moving, larger-than-life tale that chronicles Moses’s ultimately tragic journey through the Pointe-Noire underworld and the politically repressive world of Congo-Brazzaville in the 1970s and 80s.

Mabanckou’s vivid portrayal of Moses’s mental collapse echoes the work of Hugo, Dickens, and Brian DePalma’s Scarface, confirming Mabanckou’s status as one of our great storytellers. Black Moses is a vital new extension of his cycle of Pointe-Noire novels that stand out as one of the grandest, funniest, fictional projects of our time.

Review
Praise for the French edition:
“A delicious and delicate novel.”
—Le Monde

“From the first sentence there is an ease and spirit, and you know instantly that this story is authentic. Alain Mabanckou has a gift.”
—Le Figaro Littéraire

“Tasty but light to begin with, then quickly built and powerful, ultimately shattering.”
—Marianne

“He wields a sweet and fleshy tongue.”
—La Vie

Praise for Alain Mabanckou’s The Lights of Pointe-Noire:
“In lyrical and disarmingly serene prose, the author evokes shock, wonder, and sometimes dismay as he searches for his past…A tender, poetic chronicle of an exile’s return.”
—Kirkus

“This is a beautiful book, the past hauntingly reentered, the present truthfully faced, and the translation rises gorgeously to the challenge.”
—Salman Rushdie

“The author’s real achievement is to capture a universal experience, one ever more common in the age of mass migration: what it means to come home after a long absence…Few books about Africa will find it easier to attract readers far away.”
—The Economist

Regarded as Francophone Africa’s leading voice, novelist, poet, and essayist Alain Mabanckou was born in Congo and currently lives in Los Angeles, where he teaches literature at UCLA. He is the author of African Psycho, Broken Glass, Black Bazaar, Tomorrow I Will Be Twenty, and The Lights of Pointe-Noire (The New Press). In 2015 he was a finalist for the Man Booker International Prize and the Prix Goncourt des Lycéens. Helen Stevenson is a piano teacher, writer, and translator who lives in Somerset, England. Her translation of Mabanckou’s The Lights of Pointe-Noire won the Grand Prix, 2015 French Voices Award.