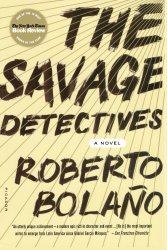 In this dazzling novel, the book that established his international reputation, Roberto Bolaño tells the story of two modern-day Quixotes–the last survivors of an underground literary movement, perhaps of literature itself–on a tragicomic quest through a darkening, entropic universe: our own. The Savage Detectives is an exuberant, raunchy, wildly inventive, and ambitious novel from one of the greatest Latin American authors of our age.

Review
“An utterly unique achievement–a modern epic rich in character and event. . . . [He is] the most important writer to emerge from Latin America since García Márquez.” ―San Francisco Chronicle

“My favorite writer . . . The Savage Detectives is an ark bearing all the strange salvage of poetry and youth from catastrophes past and those yet to come.” ―Nicole Krauss, author of The History of Love

“One of the most respected and influential writers of [his] generation . . . At once funny and vaguely, pervasively, frightening.” ―John Banville, The Nation

“A bizarre and mesmerizing novel . . . It’s a lustful story–lust for sex, lust for self, lust for the written word.” ―Esquire

“Combustible . . . A glittering, tumbling diamond of a book . . . When you are done with this book, you will believe there is no engine more powerful than the human voice.” ―Emily Carter Roiphe, Star Tribune (Minneapolis)