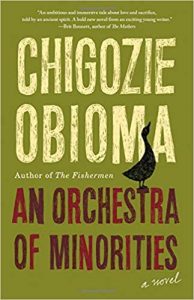 A heart-breaking story about a Nigerian poultry farmer who sacrifices everything to win the woman he loves, by Man Booker Finalist and author of The Fishermen, Chigozie Obioma.

Set on the outskirts of Umuahia, Nigeria and narrated by a chi, or guardian spirit, AN ORCHESTRA OF MINORITIES tells the story of Chinonso, a young poultry farmer whose soul is ignited when he sees a woman attempting to jump from a highway bridge. Horrified by her recklessness, Chinonso joins her on the roadside and hurls two of his prized chickens into the water below to express the severity of such a fall. The woman, Ndali, is stopped her in her tracks.

Bonded by this night on the bridge, Chinonso and Ndali fall in love. But Ndali is from a wealthy family and struggles to imagine a future near a chicken coop. When her family objects to the union because he is uneducated, Chinonso sells most of his possessions to attend a college in Cyprus. But when he arrives he discovers there is no place at the school for him, and that he has been utterly duped by the young Nigerian who has made the arrangements.. Penniless, homeless, and furious at a world which continues to relegate him to the sidelines, Chinonso gets further away from his dream, from Ndali and the farm he called home.

Spanning continents, traversing the earth and cosmic spaces, and told by a narrator who has lived for hundreds of years, the novel is a contemporary twist of Homer’s Odyssey. Written in the mythic style of the Igbo literary tradition, Chigozie Obioma weaves a heart-wrenching epic about destiny and determination.

Named a ‘Most Anticipated Book of 2019’ by Entertainment Weekly, Vanity Fair, Hello Giggles, PureWow, Literary Hub, and Fast CompanyNamed one of ‘11 Writers to Watch in 2019′ by the Los Angeles Times

Gorgeously written, with a twist of magical realism and a heavy dose of sad reality, this is your big novel of the winter.

Transcendent . . . Chigozie Obioma’s second novel is a rare treasure: a book that deepens the mystery of the human experience.

A tale of mythic nature and epic scale at times recalling Homer’s Odyssey-a sweeping story about destiny and the power of choice.

“Destined to become a classic.”

A multicultural fable that her­alds a new master of magical realism. . . . It’s a special writer who can take the familiar tropes found within AN ORCHESTRA OF MINORITIES and infuse them with new life, transforming them into something exciting and unexpected. Happily, Obioma is exactly such an author.

A deeply original book that will have readers laughing at, angry with, and feeling compassion for a determined hero who endeavors to create his own destiny.

Obioma overwhelms readers with a visceral sense of Chinonso’s humanity, his love, his rage, and his despair as he struggles between fate and self-determination.

An ambitious and immersive tale about love and sacrifice, told by an ancient spirit. A bold new novel from an exciting young writer.

Chigozie Obioma is a gifted and original storyteller. His masterful new novel An Orchestra of Minorities is remarkable for its exploration of universal concepts to do with destiny, free will and luck.

Chigozie Obioma is an audacious and ambitious writer, and quite adept at binding the reader to the irresistible spells he casts. An Orchestra of Minorities is a magisterial accomplishment by any measure, and particularly impressive for the way Obioma orchestrates a tableau in which humans and spirits must interact in a complex, emotionally rich-veined story. Few writers can match Obioma’s astonishing range, his deft facility for weaving a mesmeric and triumphant fictive canvas in which-reminiscent of the ancient masters-a cohort of gods presides over and negotiates the fates of humans.

Chigozie Obioma pens a deeply empathetic, complex, and gut-wrenchingly human narrative that captures the heart and soul. An Orchestra of Minorities stays with you. With remarkable style and compelling language, he explores what it means to experience blinding love and devastating loss. A truly gifted writer, Obioma has proven yet again, that he’s a literary treasure.

CHIGOZIE OBIOMA was born in 1986 in Akure, Nigeria. His short stories have appeared in the Virginia Quarterly Review and New Madrid. His first novel, The Fishermen, won the 2016 NAACP Image Award and was a Man Booker Prize finalist. He has lived in Nigeria, Cyprus and Turkey, and currently resides in the United States, where he teaches at the University of Nebraska-Lincoln.

The Bead Collector: A novel by Sefi Atta